Don K6GHA
You know, it seemed like a good idea at the time….
Early this summer I was thinking of doing something fun with my amateur radio hobby to celebrate the upcoming 100th anniversary for K6BJ and club events. Something different, something bringing together a few interests I have enjoyed over the years. And I thought, what better way to share my experience running a 10K (6.2 mile) race than on 2 meters using the local K6BJ repeater, carrying a hand held radio, and talking to others on a Sunday morning.
The inspiration began a number of years ago in July when I first ran the Santa Cruz to Capitola Wharf-to-Wharf (W2W) 10k race with my son. Cole (KJ6LBC) and I jogged the miles crossing the finish line together a little worse for the wear, but smiling about our father/son accomplishment. At the finish line he said it was a great experience, and I thought too bad we couldn’t share it.
Another year, and another W2W, this time running by myself. It gave me time to listen to the myriad of local bands lining the course, say ‘Hi’ to others I knew and met along the route, while concentrating on finding that illusive runners ‘second wind’.  At the end of the race (or plod) I again thought that it was too bad I couldn’t have shared the experience.

Fast forward, 2016 W2W and the starting line. The 10 weeks of practice prior to the event didn’t feel as if it was enough this time. However, this year was going to be different. For one, I had my college buddy Doug (KJ6LLW) running with me. Also, I was carrying (thankfully) a light weigh 3W Yaseu VX-3R, borrowed from Cap (KE6AFE). I had few expectations other than enjoying the run, trying to make a contact, and announcing the mile markers as I waddled past them. 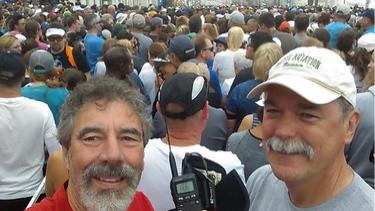 Being in the back of the pack of 16,000 runners gives you time and perspective on how big the Wharf-to- Wharf 10k has become in 44 years. The registration sold out in less than 45 minutes this year!  The starting gun goes off and it takes 12-13 minutes just to start shuffling with the crowd towards the start line. In fact, as we approach, the announcer says that the lead runners are ¾ of the way to the finish line, and this is before we even make it to the start!!
The long jog has begun for Doug and me. As we chatted, and sorted out the crowd to ‘find our stride’, I called out to K6BJ to say that I was underway… ‘snail mobile’. (Ok… now the truth… 100 yards from the start line, and I bet you would say I sounded like an old steam engine at the long end of an uphill grade. Huffing and puffing.) But… to my surprise, there are a few folks listening, and they called me back. In fact, they kept me company for the next hour (plus) while I made each mile maker and shared a mostly breathless commentary of the balloon arches, runners, and weather conditions. Many thanks to Cap (KE6AFE) and Tom (KW6S) for their continued contact support and radio reports throughout the run.
It was so much better than I thought…
In addition to the on-air support during the run, I had several runners give me a high five, take some pictures with cell phones, and a few folks by the side of the road (and finish line) acknowledge my ham radio pirate shirt and handheld 2m transceiver. This included ARES folks from Northern California, local operators, a new person looking to get into the hobby, and even the finish line PA commentator.
Who knew so many folks know of Amateur Radio? All the past years I thought I was running alone, when in fact it was with an extended hidden family, only to be found by carrying a light weight 2m radio, and running in a pack of 16,000.
At the finish line I was smiling about my decision to be ‘snail mobile’ in the 10K run. And I was thinking of all the puns I could have used on air; standing wave (at the start), pile up (at the first turn), bandwidth (running past each musical group along the course), open circuit (for those walking in running lanes), and RF burn (what I felt beginning at the first mile marker, and throughout the rest of the run!).
But … I was smiling. And that’s the point. I had a blast!

The SCCARC meets at 7:30PM on the third Friday of each month at the Santa Cruz Red Cross located at 2960 Soquel Avenue, Santa Cruz (except December).

Welcome C. A. K. E  Is our acronym for Coffee Assisted Knowledge Exchange which is a relaxed forum for discussing Ham Radio topics.

Every 2nd and 4th Saturday of the Month, 10am to Noon