The telling of these personal tales was prompted by my recent discovery of this stunning photograph of a familiar mountainous terrain. 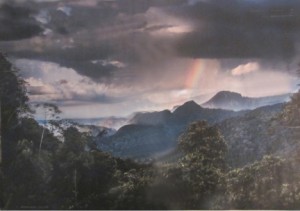 But first a few words about the significance of path profiles in connection when planning microwave links. The terrain between two proposed sites is always an important factor in determining the technical feasibility, physical possibility, performance and cost of such a link. The question to be addressed is how to confirm that a tentative path will provide clearance over obstacles before committing to a project. Obstructions include the curvature of the earth, vegetation and surfaces. The bulk of the energy in the microwave beam must be clear of obstructions with a sufficient margin in path loss called, fade margin that depends on propagation variables. What follows are descriptions of some examples that I was responsible for.

NM was my first exposure to life in of the US. Shortly after arrival I was sitting in the lobby of a hotel in NM when the front desk was held at gunpoint. This amplified my culture shock- but I digress. Microwave survey work in this area required little more than plotting coordinates and terrain data from detailed maps followed by site visits. In some cases it was possible to drive right to the sites. Today this is made even easier by having Google do the plotting. We often had a person at each end with a UHF radio for coordination and to get some idea of the path loss. We took photographs from each end and in some cases the far end was visible 20 miles away. These links ultimately all worked well

A local example was when a team of SCCARC members responded to the wishes of staff at UCMB for a microwave link from the campus to the offices at Elkhorn Slew. I was very proud to be a member of the team which surveyed and tested the path then presented a detailed proposal to the University which included the donation of all the necessary equipment.

In the process we learned a valuable lesson. The path profile seemed to be quite clear, but to confirm it we used a mirror to create a ray of sunlight which could be seen by eye at the far end. We were mistaken to believe that with optical clearance we would have no problem at RF and were puzzled to find the link was unusable. The problem was caused by a stand of trees midway in the path, it did not obstruct the marrow beam of light but severely increased attenuation at 2GHz. A very helpful farmer agreed to cut down his trees- problem solved, lesson learned.

Jamaica has a mountainous backbone whereas most developed areas are along the coast. We made considerable use of digital systems on twisted pair cable but uwave was preferred to reach several areas. Links in Jamaica were quite short but access to most sites was difficult, constructing access roads and providing AC power would have been prohibitive. The solution was to erect aluminum reflectors about the size of the screens at drive-in movies, here’s a typical installation 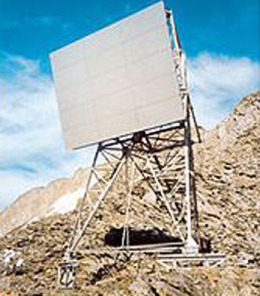 In most cases just one was needed but at another site we used two that worked in tandem.

Surveying the radio paths was trivial, calculating end-end loss was also not difficult. The main challenge was to install the reflectors very accurately under difficult site conditions. Conventional land survey techniques were required unaided by GPS or accurate maps. Foundations for the reflectors had to support hurricane force winds n the panels. In one case helicopters provided the cheapest way to deliver workers, construction materials, cement, water and reflector panels.

There was one other project that involved the first use of 11 GHz digital uwave outside the Bell System. It was a 5 mile path across a bay and the design challenge (in fact a big risk on my part) was to include a sufficient fade margin to cope with reflections from the water surface. Fortunately, with big dishes at each end all was well

As mentioned above this story stemmed from seeing the modern photograph of the very territory to be surveyed. The challenge was how such a survey could be done with essentially no maps, no terrain data and no access. In normal circumstances this would have been an impossible task but it was an unusual time. Soekano of Indonesia had gambled on invading what was then a British Colony. As the officer responsible for communications my simple life ended and I had to meet many demands both civilian and military.

The military wanted to assess the prospect of using sites on high ground as did the Telecoms Department. The RAF provided a helicopter and pilot for the purpose and I was flown 600 miles collecting data on mountain heights and locations. In short order the Ghurkas et al, ended the invasion so the pressure was off. The sites were never developed and much appears to remain as pristine wilderness and habitat for indigenous people to this day.

In another more accessible area we had located an ideal hill to develop as an active repeater site. I had to meet with local chiefs to discuss our plans and it was no surprise to learn that this hill was sacred to their gods. It called for a feast for all the local villagers. Here a young man is seen performing a head-hunters dance in honor of the rice gods. I tried it much to the amusement of the audience. 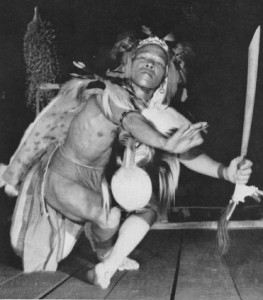 Our problem was resolved after a long night with much drinking, dancing and carousing. The chiefs agreed it was possible for their Gods to move to another hill.

Life was comparatively simple in those days!