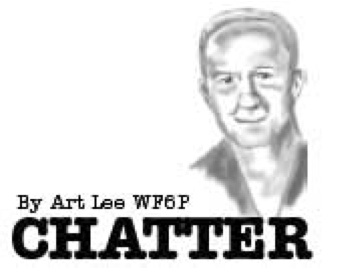 It is always sad when we lose a dear friend.  I received a phone call from my fellow Maritime Mobile Net buddy, Tim Foy, AA6GP, informing me that Herb Lundin, WA6LOB (SK), had passed on.  Herb and I were not only sailing buddies but enjoyed ham radio and boats as a dual hobby.  Herb and I worked many nights on 2 meters when he kept his sailboat in the SC Yacht Harbor.  In the mid-1980s, Herb crewed on a friend’s boat on a trip to Honolulu.  Herb brought aboard his HF rig and a couple of whip antennas and a tuner.  We established a nightly sked and I worked him all the way to Oahu.  His complaint was that he had to hang over the stern to change antennas for 20/40/15 meters.  I believe the boat was a Catalina 30 with not much freeboard.  Propagation was great and we had lengthy QSOs.  In those days boats all checked in with the Pacific MM and Seafarers Nets.  If Herb couldn’t make contact, I relayed his position reports. Herb was also a musician and often played ukulele with a group at the Elkhorn Yacht Club in Moss Landing.  He sold his last boat about a year ago.  He was on P dock, adjacent to the Cal 34, Misty, which I regularly crewed on.  We joked about it, but Herb insisted that guests on his boat bring aboard white wine only as he hated to clean his carpet of hard-to-remove stains.  Together we crewed in the Wednesday Night Beer Can races for a few seasons.  Once, Herb saved our lives when I couldn’t get the spinnaker down when entering the harbor. The wind was howling at 15-20 knots.  I was too short to grab and pull the pole down to foredeck level. Herb, being taller, jumped up and wrestled the pole down where we could release the fore guy.  We were almost on the rocks by the Crow’s Nest restaurant.  The large crowd would have been treated to a spectacular crunching of fiberglass and swimming sailors had he not acted quickly.

Herb was a very good machinist and worked for Pratt and Whitney, building aircraft engines – some of which I probably worked on.  They powered most of our naval aircraft including, the four-engine R6D.  I have many thousands of hours in the latter aircraft and never lost an engine.  Herb also manufactured high precision dental instruments for Dr. Jacklich, my former next-door-neighbor.  If you had a root canal, perhaps one of Herb’s products was used.